I’ve decided to shake my posting schedule up a bit and was thinking of posting story excerpts on Mondays.These lovely little writing samples can range from a sentence to a page and will be from novels and shorts, sometimes with pictures but probably far more often without. Just a little taste for the readers of my blog who are, well, readers and not interested in all the blech and blargle of being an novelist. Luckily for me, this idea also happened to coincide with my birthday and a lovely bit of fan art from one of my readers!

So I’ll be kicking the Monday Bon Mots off with an extra special bang. 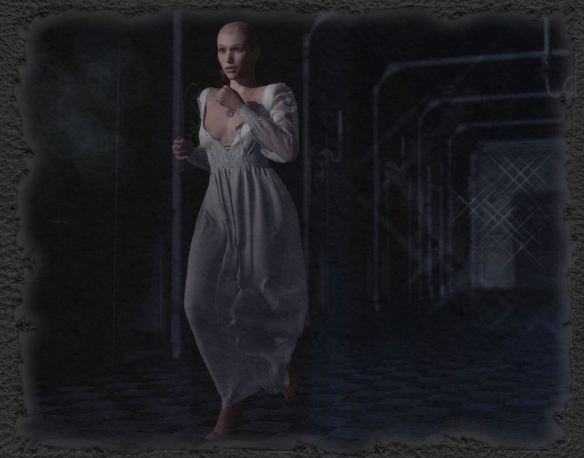 As she slipped into sleep that last image, something she had not seen but somehow had, seemed to color her dreams. If ‘dream’ was even the word for the terrible lucid journey she seemed thrown into.

Only a moment seemed to pass from the memory of the shadow and then Ash was rising from her bed, wearing not the usual comfy shirt but some far more lengthy nightgown. Slipping forth on bare feet, Ash rushed from her rooms – not into the half familiar hallway but into another room entirely. Onward her feet carried her, slipping not from room to hallway but from room to room, some of them tucked into the others in odd ways only reachable through doorways hidden in plain view; this one was behind a large oil painting, to get to that one Ash had to open a giant grandfather clock and dodge the pendulum, and the next was simply a wall with a hidden catch that swung open on a pivot and revealed not one other room but two…